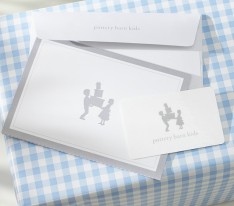 Dear Ella,
In today’s mail, I noticed an invitation-like envelope, hand addressed to my husband and me. As I didn’t recognize the return address, I was particularly curious what this “invitation” was for. I opened the envelope to find a lovely, professionally printed card with what I thought was a smaller reply card.I started reading. It was in two parts: the first was the announcement of a marriage that had already taken place, while the second was the announcement of the forthcoming arrival of their baby. I kept reading and turned over the invitation to see what I was invited to. It was blank. I pull out the “reply” card, which listed two high-end stores that these people have registered at for baby gifts. That’s it! No invite. Nothing but a card asking for a gift from us. I would love your opinion on this one.
Stunned

Dear Stunned,
While it’s always nice to receive news about happy occasions, in this case, it’s been overshadowed by the request for gifts. The first word that pops into my head is “Chutzpah” which means audacity. A few choice other words followed out loud, but I won’t repeat them here.

Maybe I was jumping to conclusions? Maybe I was being too judgemental?

Having never heard of this type of gift solicitation, I showed the “invite” which was forwarded to me, to a number of people. I showed it to older people, younger people, and people in a range of socioeconomic and cultural groups. I thought, possibly, that with the fast pace of technology, such as e-mails, texting, social networks and e-cards, this might be a new way people are doing things. No need for an expensive wedding or baby shower – what a waste of time and money when we could simply cut to the chase and go directly to the gifts!

I polled more than 100 people, and the opinions were unanimous. The shock and bewildered looks I received as they realized what they were reading were all similar. Some thought maybe these people were needy, but the gift registrations were for expensive, trendy stores, Pottery Barn Kids and Toys-R-Us Babies, so that theory was quashed. Clearly this couple was misguided and oblivious to how people would react. Maybe they received poor advice from a well-meaning friend or relative?

Whatever the reason, I can find no redeeming conclusion, so I gave the invitation a royal place in my recycling bin. I do have to wonder how many gifts they received.