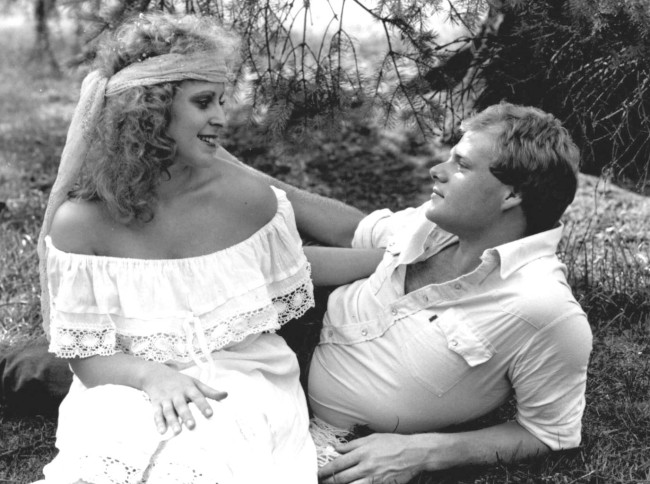 30 years ago today I married an amazing man Marshall Cohen who has been by my side since I was 15 years old. We were great friends long before we ever decided to make it official. Our wedding never turned out quite like we had planned (some of you reading this were there:). For years Carolyn Blackman, one of the editors at The CJN asked me to write our story for the Bridal section of the paper. I finally relented as this year since it’s a biggy. I don’t think Carolyn would mind if I jumped the gun a little and posted the story here first.

Just a few more days and all the plans for the big wedding will come together. 120 people, food, music, all the rentals for the perfect wedding under the stars in my backyard. Even the weather was co-operating. My aunt and uncle came all the way from Israel. Even though my Uncle Lipman was not in the best of health, it was important for him to be at his niece’s wedding. Lipman and my father were the only members of their family who survived the Holocaust and although they lived thousands of miles apart, their bond was strong.

Rabbi [Moshe] Stern insisted I go to the mikvah, not something I had planned to do, so my Aunt Sonia, my sister Sarah and I all made an evening of it. It was a very foreign ritual for me, but somehow I felt a little purer when it was over, maybe even a little more worthy of such a special occasion when I was committing myself to the man who had been such a huge part of my life since I was 15 years old.

We met a year after my mom died, Marshall’s mother had a massive stroke around the same time I went through my trauma. We were both pretty broken teenagers when we met.

Fast forward 12 years and we were about to get married. Then it happened. The phone rang, my father was downtown at Simpsons with his brother Lipman and he took ill. They rushed him to Mount Sinai Hospital, where they told us he had a myocardial infarction. “English, speak English!” I said, but I couldn’t hear anything anyway. My head was spinning and my dad was dying.

Sarah, Marshall and I spent days at the hospital and when we weren’t there, we were cancelling all the wedding plans. We only had a few days left. Every single person had to be called and I had to relive it over and over. Most of the services I had booked were gracious and returned our deposits.

A couple of days before the wedding was supposed to happen, I went to see my dad in the intensive care unit. Rabbi Stern was standing beside his bed. He was hooked up to tubes and monitors and the room was filled with those awful beeping noises. I looked at my father lying there, pale and weak. He heard me say hi to the rabbi and opened his eyes.

“You’re not cancelling your wedding,” he said to me in Yiddish.

But then Rabbi Stern spoke, and said in our religion you don’t cancel a simcha (a happy event). He explained that I do not have to have the elaborate event I had planned, but that the wedding should indeed take place.

My head was reeling, and I thought these two had lost their minds. In a million years I was not having a wedding. But alas, Marshall and I relented for the sake of my dad. Neither of us wanted to upset him any further.

So the wedding was back on. Not the wedding we had planned, but none-the-less a wedding. Marshall had cancelled his tuxedo, and all the food, the photographer, videographer, tent, music, all cancelled. I still had my wedding dress because it was a gift from my sister.

Sarah went to the Open Window Bakery on Bathurst Street and the Double Dip was now my wedding cake. She made tuna and egg salad sandwiches and that became the food we served at my home after the wedding.

We called only very close friends and immediate family, and the ceremony did indeed take place on Oct. 2, 1983 at Shaarei Tefillah Congregation with Rabbi Stern officiating. The chazzan hummed a morose tune as my sister walked me down the aisle, both of us fighting back tears.

Marshall, Sarah and I went down to the hospital to spend the rest of the day with my dad, and none of us changed out of our wedding clothes. When we walked into his room, he was sitting up, tubes removed, a big smile on his face and tears streaming down his cheeks, at the sight of me in my wedding dress. He came home a week later.

This month, Marshall and I are celebrating our 30th wedding anniversary. If I only knew then what I know today, I would not have fought marrying this incredible man who stood strong by my side that day and who continues to walk beside me through all of life’s journeys. It was never about the wedding, it’s all about the marriage and all about family.

Sometimes I watch young people making elaborate productions when they plan their weddings, with every detail in place, every flower accounted for and every bow perfectly tied. If something goes wrong, it’s like the world has come to an end. I think to myself, if they put that same effort into their marriage, they will be as happy as we are.